The Sciphone Dream G2 is a MT6235 based phone running UI software to mimic the look+feel of Android.

OsmocomBB does not yet support any Mediatek chipsets, so this phone is not supported by OsmocomBB.

More information on the hardware of the device can be found at http://en.qi-hardware.com/wiki/Sciphone_Dream_G2
The phone has a engineering menu which can be activated by dialing *#36466331#

You can make a serial cable by sacrificing the headset that comes with the phone, and swapping the pins inside the connector. 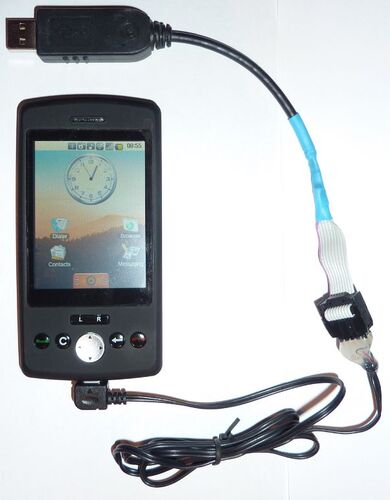 The JTAG port of the MT6235 is accessible on the phone PCB, see the attached picture.
You can use OpenOCD along with the attached configuration file ([raw-openocd_mt6235.cfg]) for debugging. 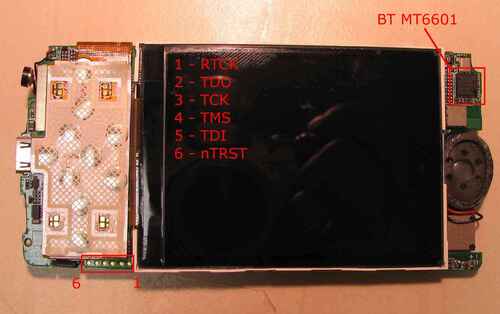 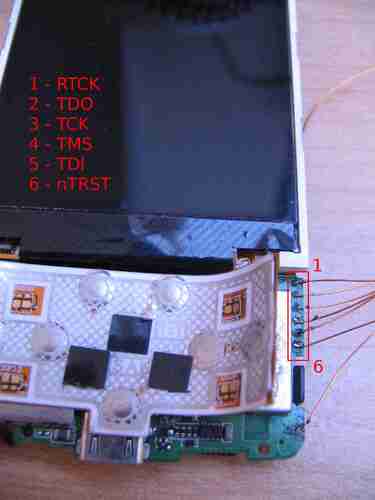 Like all Mediatek MT62xx SoCs, the phone uses the MTKRomloader.

For executing U-Boot and Linux using the MTK romloader, proceed as follows: 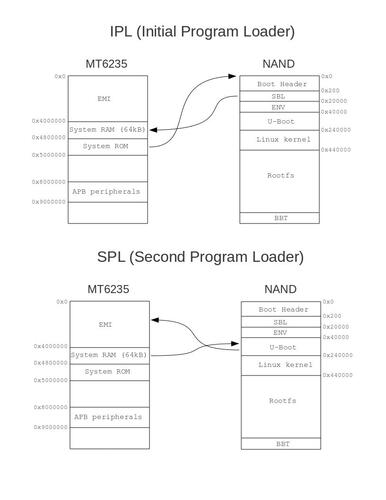 This is first code executed after power up.

If beacon won't be received, it jumps to NAND memory read procedure.

At NAND 0x0 address Boot Header is placed which holds informations about NAND memory and parameters of image which is going to be loaded.

If Boot Header read from NAND memory will match to currently used NFI configuration, bootloader will start to read data from NAND to internal SRAM. Internal SRAM size is 64kB, which means that code loaded by IPL can't be bigger than that.

Note: IPL doesn't configure PLL and SDRAM controller, so there is no possibility to load code to external RAM. Here is where SPL (Secondary Program Loader) comes into the game.

Using default build it occupies less than 4kB, but it lacks NAND memory detection. All the NAND memory types can be specified using preprocessor which is not comfortable. We already identified three different NAND memories and that would be bad to create seperate builds for them.

Fortunatelly there is no need to strip down SPL size to 4kB, so SPL code has been reworked and new functionalities are added. It detects NAND memory at startup and configures NFI controller automatically. New implementation can be found at "nand_spl/nand_boot_detect.c".

SPL also automatically configures SDRAM controler according to RAM you have on your device (currently it tries two configurations).

SPL is generated on every U-Boot build and binary can be found at "nand_spl/u-boot-spl.bin".

SPL will be loaded and executed by IPL only if Boot Header will contain valid data (in this case checksum and length is most important).

To generate Boot Header and place it at the begining of binary you should use mtk_image tool. MTK Boot Header generator can be found at "tools/mtk_image.c".

mtk_image tool needs dump file from your device (at least 64 bytes read from NAND 0x0 address) as there are different NAND memory configurations. Thanks to that Boot Header will be properly generated for your device.

Note! Before flashing U-Boot to NAND, create full dump of your NAND, otherwise you'll be not able to restore phone's original software.

The easiest way to have file system in Linux kernel is to build Initramfs image.

You need to download Busybox, configure it and build it.

Additional to that you'll need to create console device in already built filesystem.

Now you can create CPIO archive:

Next step is to point to Linux kernel where initramfs image is located.

In menuconfig of Linux kernel you should modify following option:

After these steps Linux kernel image will have initramfs built in.

Important note: Initramfs ignores 'init=' variable given in kernel boot parameters list. It always executes /init command at startup and you can't change it. Check if you have /init in your file system (BusyBox has /linuxrc by default, so just change its name to init).
Every time you change initramfs file system you have to rebuild also Linux kernel.

To unpack CPIO archive you can use following command:

So far three types of NAND memories has been identified:

All of them are supported by "mt62xx_nand.c" NAND driver in U-Boot.

This driver has also support for ECC hardware decoding and encoding.

ECC layout which is used by MTK looks as follows:

ECC layout information is pretty important as built-in bootloader in MT62xx chips
has hardware ECC enabled and it won't load code from NAND if ECC layout will
not match.

This layout is also important to properly dump or restore existing firmware.

NAND driver for Linux is under development.

To identify what kind of controller is in your device, just check U-Boot prints.

U-Boot supports displaying bitmap on the screen, you just have to create bitmap in proper format.

To convert your customized bitmap change type of bitmap to indexed.

MT6235 LCD controller shares data lines with NFI (NAND) controller. Currently there is no possibility to use NAND when LCD is used.

Frame buffer driver for Linux is under development.

Comment from "sciphone_g2.h" configuration file explains how BBT is handled.

Layout of MTD partitions is following:

Currently the easiest way to build your own Linux distribution for Sciphone G2 is to use OE.

Setting up of OE is described here.

To have Sciphone G2 target and Linux kernel with U-Boot from OsmocomBB repositories, you need to apply patch from here.

Under above link you can also find example config file for OE build.

So far following images has been successfully run on Sciphone G2:

U-Boot and Linux kernel are built from latest sources found in OsmocomBB repositories. 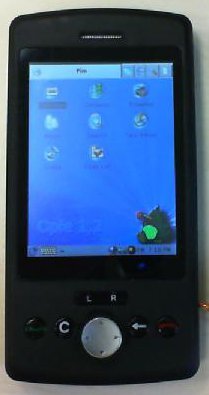 It's possible to run any Linux distribution without flashing Sciphone's original firmware.

To do this, you need to prepare microSD card and use osmocon loader to load u-Boot image to RAM.

Current images for U-Boot and Root File Systems can be found here.

First of all ext3 partition has to be created on SD card.

Note!!! Followig method will erase all data on your SD card.

Next step is to copy built image to SD card:

When operation is finished, you can pull out SD card from PC and insert it to Sciphone.

After that you should see OsmocomBB splash screen with "Please wait ..." text and after few moments an OPIE welcome screen should appear.

Note!!! Initial boot takes much longer time than next ones.

If your screen is not properly calibrated, execute ts_calibrate command from shell which will recalibrate your touchscreen.

During development process you'll waste a lot of time to pull out and put in microSD card with new software. 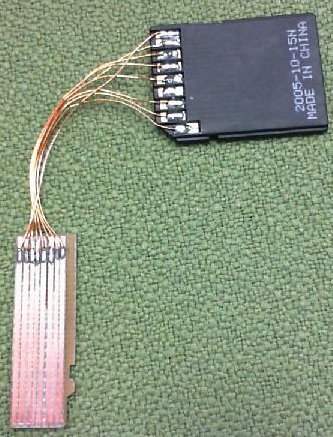 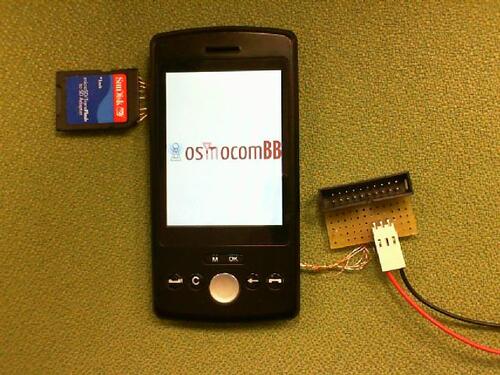