Osmocom developer jolly has started a new project for implementing the central-office side of the ISDN U (Uk0 in Germany) interface using a sound card with 192kHz samplerate.

Using this setup, you can connect an ISDN NT for BRI (NTBA in Germany) to your sound card, and provide ISDN services via mISDN.

Some basic information about a first proof-of-concept can be found at Software_Defined_Uk0; stay tuned for more information. 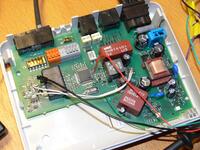 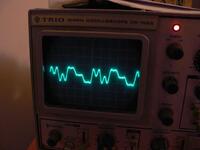 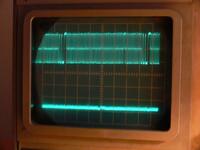 This time, Sec and schneider will be presenting an Iridium reverse engineering update

NOTE: There will be no recording of this talk. If you're interested, you have to participate live!

This time, tsaitgaist will be presenting on USB-C - the connector and USB-PD

Yesterday, laforge and manawyrm have managed to establish the first successful calls between two ISDN PBX interconnected via the Proposed_efficient_TDMoIP protocol implemented in osmo-e1d using the icE1usb hardware.

The setup looks as follows:

Using this setup we could validate so far:

Contrary to other established TDMoIP protocols, it is both transparent / protocol-agnostic and only transmits those timeslots of a E1 PRI circuit that are in use.

We are therefore fairly certain that this setup can be the basis of the larger intended Community_TDMSS7_Network we have in mind. There is lots of work to do, and we appreciate any help (see project issue tracker).

The talk covers some of the more advanced topics related to SIM cards:

It is expected that the audience is familiar with SIM card basics, such as SIM/UICC/USIM concepts and the general file system abstraction.

We're happy to announce the 23nd incarnation of OsmoDevCall

In this edition, we will not have any presentation, as sadly nobody has volunteered to present this time. Nevertheless, we still hold the call in case anyone wants to chat about random stuff.

The pySim source code has contained built-in sphinx based documentation for quite some time, but users had to build the manual locally from source.

A HTML rendering of the [latest git master] pySim user manual is now published at https://downloads.osmocom.org/docs/latest/pysim/ - it is automatically updated via our jenkins CI.

A number of previously unavailable historical German national standards related to (mainly) ISDN have been uncovered and are now availale as PDFs from https://people.osmocom.org/laforge/ftz/ (and in more structured presentation with metadata at German_FTZ_ISDN_Specifications).

The standards include, among many others

Yesterday, the concepts of the Proposed_efficient_TDMoIP could be validated in practice for the first time using the work-in-progress implementation in the laforge/e1oip branch of osmo-e1d

The setup consisted of two icE1usb USB-E1 interfaces with built-in GPS-DO transporting an E1 line over an intermediate IP network. The clock synchronization has been monitored and sufficient stability over a period of several hours was confirmed, with no underruns/overruns or cycle slips.

There's still a lot of work to do to make this more usable via consume internet connections with NAT and dynamic IP addresses, but the concepts could be shown to work in practice:

We're happy to announce the 22nd incarnation of OsmoDevCall

In this edition, laforge will present a number of brief (lightning) talks about a number of projects he's currently been thinking about or working on, including

The idea is to ping-pong some ideas wit others and maybe find somebody interested in helping out.