Added by laforge about 2 months ago. Updated about 1 month ago.

Soem initial tests with a PrTel93i doing BERT testing on a single B-channel indicates we have some problems to investigate. 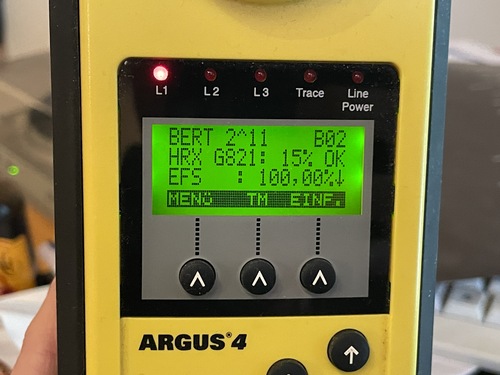 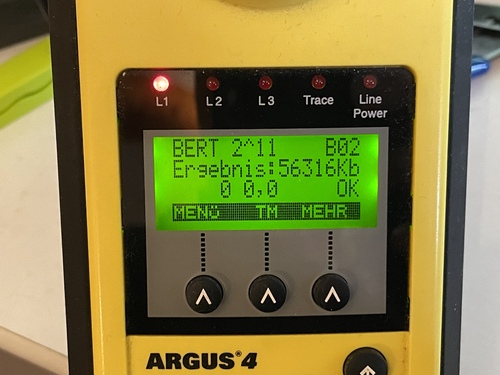 Some testing of PrTel93i via Auerswald PBX to DAHDI/freeswitch (retronetworking Event setup) and back has shown 15min with zero BER.

Some testing of PrTel93i via Auerswald PBX to DAHDI/freeswitch (retronetworking Event setup) and back has shown 15min with zero BER.

This was confirmed several times yesterday and today. IT still worked after upgrading DAHDI from dahdi 3.1.0 to the dahdi-linux laforge/trunkdev. The only time I saw a bit error was when enabling/disabling RXMIRROR/TXMIRROR after the call had started. Starting captures before (and terminating after) the PrTel call has 0 BER.

traces of the BER pattern are at https://people.osmocom.org/laforge/retronetworking/prbs/ - we can see that there's a 0x5D pattern for synchronization before the PRBS sequence starts.

According to manawyrm the PRBS sequence matches the prbs11 we have in osmo-prbs/libosmocore.

I've started to read up, hopefully understand and hack my first yate module implementing source/consumer/channel/driver classes. Put it aside for now as other bits were more important.

Updated by manawyrm about 2 months ago

Then I've done some additional testing, such as removing the icE1usb completely from the signal path.
My setup looks a lot like the Nuremburg hub now. Uplink to OCTOI is now being done using trunkdev.
Clocking is still provided via a port on the TE820 from the icE1usb, but no data is passing through the icE1usb.

what have we learned:
icE1usb seems to be innocent, a pure trunkdev setup also exhibits the bit errors.
I believe this testing restricts the possible problem points to just OCTOI/osmo-e1d itself.
This is a rather brave assumption, but we've already seen this behaviour before the move to Nuremburg, so I don't think the new HW or the added VM layer are problematic.
My 0 BER setup also runs inside a VM, so that should hopefully be fine.

I have added some rudimentary debugging (just dumping the raw data into a file) on both the input and output of the RIFO code.
No errors and differences were noticable (no reordering occured while this test was running).

My ISDN tester also beeps whenever an error is detected, which is useful for correlating bit errors to osmo-e1d logs.
It doesn't beep when reordering occurs. It does beep when packet loss occurs. This is exactly as expected and a good sign :)

I've also timed the delay between errors (which always seem to come in bundles) and couldn't find any noticable systematic timing. Seems to be somewhat random.

laforge As you're the author of the e1d/OCTOI code: Can you think of any other places in the e1d code where something like this could occur (which would affect both icE1 and trunkdev)?

Thanks for your testing.

Please note that we (tnt and I) did quite a bit of testing with PRBS testing on all timeslots, without yate/ISDN on top. The code for that is in osmo-e1d/e1-prbs-test. As far as I remember there were no PRBS issues discovered in either real E1 (between 2x icE1usb, or between TE802 and icE1usb) nor over OCTOI. At least not at the time. I guess the best way to start is from the bottom up by re-doing those tests in a variety of configurations. If those tests still work while your ISDN-based single-TS tests fail, it must be something about the yate/dahdi integration.

Maybe it would be worth to

This way anyone could connect as prbs user and could get PRBS results for all TS in the same timeline as packet re-order/loss statistics.

Updated by laforge about 1 month ago

manawyrm what your testing didn't rule out is some other problem with DIVF specifically, such as the interrupt misses likely caused by virtualization. All your tests involving osmo-e1d/octoi-protocol also involved the DIVF instance.

manawyrm what your testing didn't rule out is some other problem with DIVF specifically, such as the interrupt misses likely caused by virtualization. All your tests involving osmo-e1d/octoi-protocol also involved the DIVF instance.

Indeed. I'm aware and I want to build a simpler (local) setup next and try to build a DIVF clone and see if the trouble still occurs.
I do have a similar AMD Epyc machine available, I do have the TE820 (well, only 1), but I think I might be able to get something to happen.

Currently away from my setup for another week again...

Updated by laforge about 1 month ago

I'd really like to have some kind of device or program or setup containing of any combination of software and hardware where we can do automatic (scripted) ISDN B-channel BERT. Doing this manually on a PrTel or Argus just doesn't scale.

some months ago, I was trying to write some "simple" testing code using libcapi20 (see https://gitea.osmocom.org/retronetworking/capi-hacks). It contains a simple "B channel loop" mode where all data received on a b-channel is echoed back to it. I was trying to use this with BERT testing, but unfortuantely it created significant (E-2/E-3) BER rates via a hfc-usb / mISDN / capi20 path.

Today I tried the same using the rcapi protocol of a Bintec_X1200. Unfortuantely with the sam results: Very high (E-2/E-3) BER is reported. I initially thought this might be due to the lack of TCP_NODELAY in the rcapi module of libcapi20, but even when adding that setsockopt call, I still had the high BER.

When making a voice call and speaking, the BER is not audible.

OK, I did some more BERT testing.

My yate is running on a Debian 11 VM, clocked by an icE1usb on Port 1 of a TE820 (which is passed through to the VM).
Host is Debian 11 as well, Intel i5-10400 CPU, qemu-kvm & libvirt for virtualization.
Default kernel parameters on the host.
The VM is using "pcie_aspm=off pcie_port_pm=off" (which was leftover from all the PCIe->PCI bridge testing)

As far as I can tell, the main differences are:
- Intel instead of AMD CPU
- 1x TE820 card instead of 2
- PCIe PM disabled on the guest

(I'm also not seeing any of those lost interrupt errors. I've correlated the timing of the messages in dmesg on DIVF with the errors in the B-channel and they do not match!)

Some ideas:
- disable the second TE820
- update the host kernel to Debian backports
- disable PCIe ASPM (maybe on both host and guest)

I have access to some AMD machines of the same generation, unfortunately without TE820. Maybe worth a try to replicate the problem there?

Just switched the Kiel and Alfeld setups back to the Berlin node at LaF0rge.
Interestingly enough: Same problem.