According to
https://jenkins.osmocom.org/jenkins/view/TTCN3/job/ttcn3-bts-test/test_results_analyzer/
this test case fails consistently, it must be investigated. 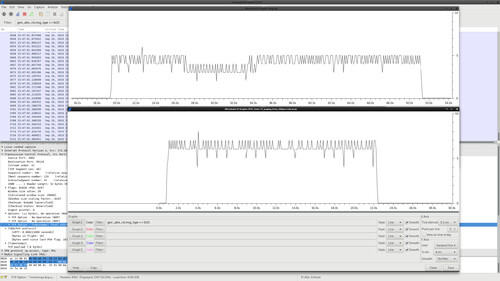 #1 Updated by laforge over 2 years ago

So somehow on the jenkins less paging messages make it compared to my local setup. interesting.

#2 Updated by laforge over 2 years ago

on the jenkins build slave:

so for some reason, on my laptop 244-228=16 more messages have been received, each containing 4 identities, resulting in a difference of 64 paged IDs. But why?

#3 Updated by laforge over 2 years ago

#4 Updated by pespin about 2 years ago

This test fails with osmo-bts-trx+osmo-trx+motorola CXX but in the other direction, that is, it's now expecting less messages than the amount arriving:

So it seems https://gerrit.osmocom.org/7811 is not the proper definitive fix for this test.

#5 Updated by pespin about 2 years ago

#6 Updated by pespin about 2 years ago

#7 Updated by pespin about 2 years ago

This is what we get when running docker non-HW test:

#8 Updated by laforge about 2 years ago

this is odd. After all, the bandwidth of the downlink CCCH (and the PCH within
that) is fixed. It is impacted by BS_AG_BLKS_RES as well as the channel configuration
(combined vs. non-combined BCCH/CCCH). But neither of those should change between
executing with trxcon+fake_trx or with real hardware.

So in order to debug this, I think I would start to count the number of PCH
messages sent on the BTS side vs. those received by the MS. This can be done
completely outside of the osmo-gsm-tester setup and in any virtual or real setup.

pespin can help you with computing the theoritcal amount of PCH blocks on a
combined and a non-combined CCCH, which should give you some context as to what
we actually expect.

Make sure to distinguish between

Those figures are all separate, and there are processes within OsmoBTS which
aggregate RSL PAGING commands into PCH blocks with multiple identities. And
it's that paging aggregation process that we actually want to test under overload
conditions, i.e. when a sustained flow of RSL PAGING messages exceeds twice
the capacity of the PCH capacity, even if the aggregation works ideal.

#9 Updated by pespin about 2 years ago

Comparing time span of HW and trxcon setups (time from 1st packet to last one):

So the issue is clearly with TTCN3 in the HW setup not sending RSL paging commands in the specified time (20 seconds). As a result, BTS receives paging at a slower peace and hence has time to forward more IDs to the MS.

Following comparision of graphs from pcap trace in both setups shows the issue (HW setup run sends less paging commands per second). This is probably due to the HW setup running osmo-trx on an APU machine, which eats most of the CPU and thus TTCN3 test is not scheduled on time. TTCN3 test always sends a paging command, then waits for a fixed interval, instad of accunting for scheduling delays.

So we need to fix the test to account for scheduling delay, then it should be fine.

#10 Updated by pespin about 2 years ago

After my changes to account for scheduling delays, variation of packet frequency and time span over whole test look a lot better, and more similar in both machines (my high end laptop running trxcon setup and the low end APU running osmo-trx with HW setup).

However, since now the test really follows the 20 seconds, throughput of received paging IDs has slowed down a bit, because previous implementation always drifted a bit (like 2 secs) even in high end setups, so osmo-bts had more time to manage the pagings.

#11 Updated by pespin about 2 years ago

Should be fixed by:
https://gerrit.osmocom.org/#/c/osmo-ttcn3-hacks/+/11103 bts: Account for elapsed time in paging timer

I tested it several time in my PC (docker, trxcon) as well as on real HW with osmo-trx.

#12 Updated by pespin about 2 years ago